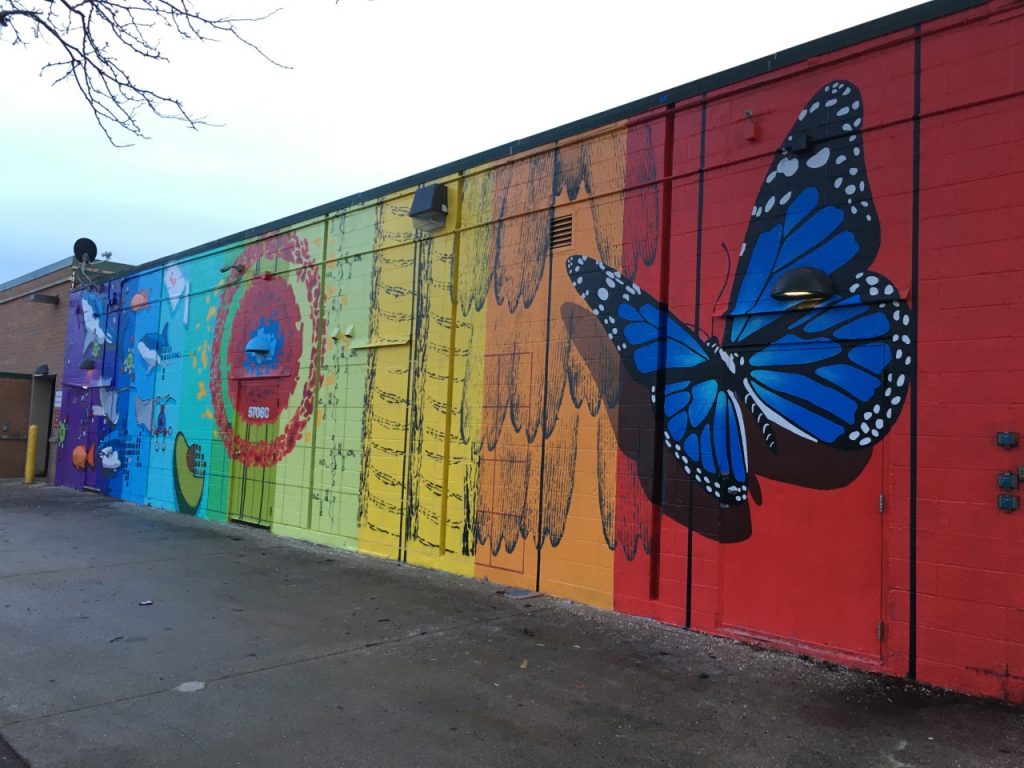 The Periodic Table Mural explores the fascinating world of elements as the building blocks of everything with two different but complementary approaches.

The left half of the mural, a scene under a sea painted by FORNOW communicates the theme through the actual “building blocks” by depicting sea creatures breaking down into their elemental components. These building blocks are a part of our everyday world, making up the sea life in our mural to the food we eat.

Within this section of the mural you can see sharks, manta rays and other fish swimming in a spectrum of blue waters. The shark is a recurring theme within FORNOW’s street art.

Did you see the salt packet in our mural? Salt connects to the food we eat, and the environment that the sharks and sea life lives in. In the water, table salt dissolves into positive sodium ions and negative chloride ions to make up the seawater our colorful creatures swim in! Seawater contains an average of 2.6% (by weight) sodium chloride, or 78 million metric tons per cubic kilometer, an inexhaustible supply – to learn more checkout NASA’s Nature of Salt.

And yes, we have an avocado in the mural – because who doesn’t like an avocado?

You’ll notice the two different styles of art at this section of the mural because our artists Peter Krsko and Mario Fregoso’s designs converge.

Dive into the heart of an atom:

The right half of the mural painted by Peter Krsko examines the concept of chemistry through a microscopic journey from an individual atom of hydrogen in the mural’s center to the complex structure of a butterfly wing. The representation of the hydrogen atom describes how an electron orbits around its nucleus.

From atom to butterfly:

All the known elements are organized in the periodic table of elements according to their properties. Can you spot the periodic table in the background? These variations in the their characteristics cause every element to have a different signature in the absorption spectrum – depicted by the black vertical lines in the rainbow background.

Looking to make your own periodic table? Let our coloring pages be your guide! 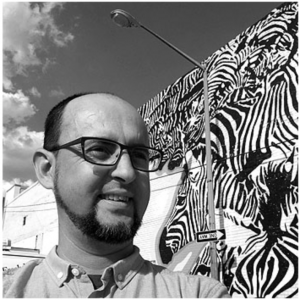 Peter Krsko
Peter Krsko listens to nature and creates objects and experiences to share his observations. His approach combines science and art; participatory, interactive and community arts; and play with hands-on education. 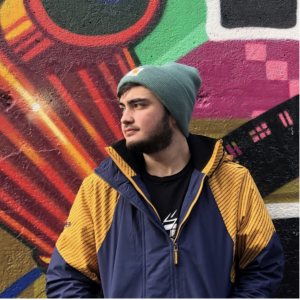 Mario Fregoso, FORNOW
Mario, known as street artist FORNOW, was born and raised in the Milwaukee area. He grew up listening to and being inspired by his father’s punk music. Punk was a precursor for a new passion, Hip-Hop. Anyone who has seen a Hip-Hop music video from the 80s-90s, would understand that it is not simply music but it was (and is) a revolutionary cultural explosion. Style, dance, counter-culture and art were forever altered by Hip-Hop. Mario embraces these into his own creative outlet, practicing dance and graffiti art. 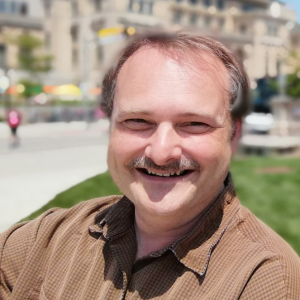 Prof. John Berry
Department of Chemistry
John Berry is a professor in the Department of Chemistry. The Berry lab looks at compounds that contain at least two metal atoms bonded to each other; a motif not encountered in many chemical compounds. The importance of the metal-metal bond in these compounds is investigated by comparing the reactivity of these compounds to compounds that do not contain this metal-metal interaction. Berry’s background is not only in chemistry, but also in musical composition. He uses this dual background in chemistry and music composition to communicate science broadly. For example, through the Wisconsin Institute for Science Literacy, Berry has recently organized a “Concert at Chemistry” as a collaboration between the Department of Chemistry and the School of Music. The theme of this concert was “clusters” in chemistry and the music featured the world premiere of Berry’s Three Petrarchan Sonnets for soprano and piano. This piece features “cluster” harmonies that were compared with metal-metal bonded “cluster” compounds prepared in the Berry lab. 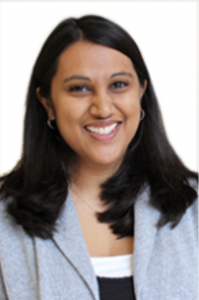 Desiree Bates
Department of Chemistry
Desiree Bates is a Computational Chemistry Leader within the Department of Chemistry. Desiree Bates teaches students at a variety of levels on how to employ computational approaches to aid their research. In addition, Bates teaches a course on basic computational chemistry for non-theoretical chemistry students. She is committed to supporting student life and diversity, contributing to new initiatives such as the recruiting program Chemistry Opportunities (CHOPs) and Catalyst, a graduate student peer-mentoring program.