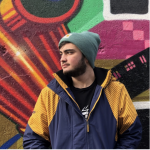 Mario, known as street artist FORNOW, was born and raised in the Milwaukee area. He grew up listening to and being inspired by his father’s punk music. Punk was a precursor for a new passion, Hip-Hop. Anyone who has seen a Hip-Hop music video from the 80s-90s, would understand that it is not simply music but it was (and is) a revolutionary cultural explosion. Style, dance, counter-culture and art were forever altered by Hip-Hop. Mario embraces these into his own creative outlet, practicing dance and graffiti art.