Let’s take a trip to the stars! 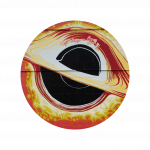 A Black Hole is a region in space where matter has become so dense that not even light can escape its gravity. A black hole is formed when a massive star collapses at the end of its life. 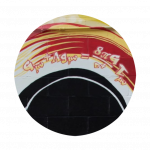 The equation wrapped within the black hole design, explains the law of gravitation and its relation to other forces of nature. It helps us to understand and explain what a black hole is and how it works. For unfortunate objects that get into a black hole’s event horizon, gravity compresses the object horizontally and stretches the object vertically just like a noodle, which is why scientists call this spaghettification. Find out more about spaghettification and other fun facts though NASA’s article on the “Ten Questions you might have about black holes.”

Hidden within one of the atoms of our mural, the artists had a little fun, adding the Schrödinger Equation. Where Einstein’s Theory of General Relativity is applied to large objects, Schrödinger Equation is applied to the small. This equation is the foundation of quantum mechanics and is applied to understand the behavior of systems at atomic and subatomic scales. Equations often used for subatomic physics (subatomic particles are smaller than atoms) are generally not relevant to massive, astronomical phenomena.

Learn more about general relativity from the BBC

Download the far out astrophysics coloring pages created by artist, Rebecca Jabs!
(scroll – there are 12 in all!)